If you're like me, when you think of etiquette, you probably think of fancy dinners and knowing how and when to use your salad fork instead of your regular fork. Or knowing when to hold a door open for someone else. Or knowing that you should not talk loudly on your phone while in the audience at the third grade choir concert.

Etiquette is "the customary code of polite behavior in society or among members of a particular profession or group." (I got that definition from dictionary.com.) (Citing sources for quotes is showing proper etiquette.) Or, to put it another way, etiquette is simply knowing what to do in a social setting in order to not be rude to those around you. (I made that definition up myself, so it might not be completely accurate. If you have a problem with that, well then excuuuuuuuuuuse me!)

The rules are very simple. I shouldn't have to actually list them. And yet, every time I go into a public restroom at least one of these basic rules has been violated. Come on, people, this is not that difficult! Here are some rules:

2. Make sure your flush actually worked--When you finish your business in the toilet, you usually will have an inkling whether or not what you left inside the bowl will go down with one flush, or if it's at risk of needing multiple flushes. If you think it might take more than one flush, it is your responsibility to make sure it gets that second flush. You can't just flush once and walk away. It's your duty to attend to your doody. (Because no one else wants to see it.) 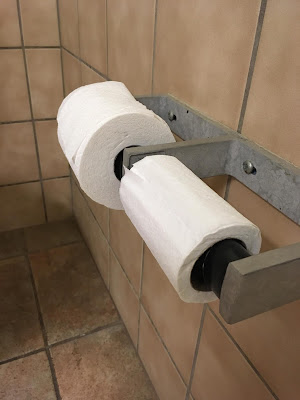 4. Don't put anything in the urinal (except urine)--Men, they call it a urinal because it is there for your urine. It is not an ashtray or a garbage can. Here is a partial, non-comprehensive list of things that should not be put into a urinal: paper towels, gum, gum wrappers, soda cans, toilet paper, coins, chewing tobacco, ashes, cigarettes, cigarette butts, or butts of any kind.

5. When possible, give people their personal space--If there are multiple urinals or toilet stalls and someone is already occupying one of them, if possible, don't use the urinal or stall right next to them, give them some space. For most people, going to the bathroom is an activity they prefer to do in privacy. No one wants an audience. Of course, this is dependent on the number of stalls and urinals, and the number of people wanting to use them. (I hear this is never a problem in the women's restroom, because they always have several extra stalls--way more stalls than women wanting to us them.)

6. Don't talk--No one should go into a public restroom with the intent of meeting new people or making new friends. The bathroom is not a place for chit chat. Unless you're warning me that the stall I'm about to go into is out of toilet paper, just keep your darn mouth shut, okay?

7. Keep your phone in your pocket--Don't talk on your phone. We don't want to hear your conversation. (And the person on the other end of your phone probably doesn't want to know you're in the bathroom when you're talking to them, either.) Also, since all phones come with camera technology, it's best just to keep them put away--you wouldn't like it if someone was walking around the restroom with a camera in their hands, would you?

When it comes right down to it, this is the kind of etiquette we should all really be paying attention to, isn't it? (Because I really don't care whether or not you're using your salad fork properly.)
Posted by Slow Joe 40 at 8:26 AM