Through the Throngs (A Black Friday Experience) 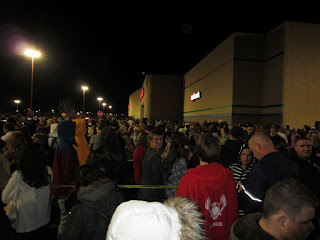 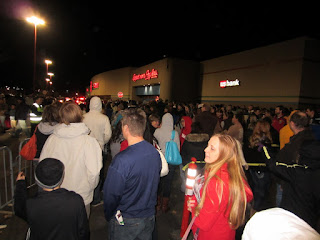 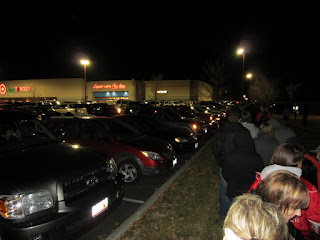 Growing up on the farm, I used to work with cattle. Last night, I was part of the herd.

Yesterday we spent a good portion of our Thanksgiving looking through the newspaper advertisements (you remember newspapers, right?) trying to find the best bargains. We were looking, in particular, for a good deal on a large television. (Our current tv is in the process of dying, and The Wife has decided she can no longer wait for my Vikings to make the Super Bowl for us to get a new one.)

So, that's how I came to be standing near the Target parking lot at 11:20 PM with a few thousand of my (not so) closest friends.

The television in the Target ad looked the most promising. (I believe it was a 68-inch tv for about $27.89) (I may be exaggerating a bit.) The store was to open at midnight, so we thought we'd mosey over that way a bit extra early. We weren't "extra early" enough. We managed to find one of the three last parking spots in the entire lot.

Four police cars were lined along the front of the store. (They weren't there for the donuts.) Crowd control can't be a fun job, but at least they weren't wearing riot gear.

We stood dutifully in our place while the forty minutes passed until the store actually opened. A loud cheer arose as the line finally started to move.

Aside from the people standing in line, there was another group milling about in the parking lot, looking for an opportunity to crash the line. A glop of about twenty of them attempted to smush their way in where the line was most vulnerable, as we attempted to cross the parking lot driveway. Thankfully, the Target crowd control crew saw what was happening and rushed in to stop it, herding people away and shouting, "Go to the back of the line!" They were able to stop most of the interlopers, but one nasty, haggard-looking woman managed to sneak in a few spots behind us. The mob mentality almost took over, because I thought about grabbing her and physically throwing her out of the line. But, laziness prevailed and I did nothing.

As we wound our way around toward the door, The Wife, who is a math teacher, did some math. Using a quick formula based on how many people fit into each parking spot, and how many times the line wound around, she determined that there were AT LEAST 3,000 people in the line, with the possibility that the total was over 5,000.

It took 30 minutes from when the line started to move until when we were able to actually enter the store. It didn't take long to determine that the television we had gone there for was sold out. But, we had a few other things we wanted to look at, so we started out shopping.

I grabbed a shopping cart. I did this for three reasons: 1) to put the stuff in that we were going to buy; 2) to give myself a little bit of a personal space buffer; and C) to possibly use as a weapon to ram people with if need be.

Having grown up in a small town, I'm not really accustomed to large groups of people. (There were more people in the electronics department than live in all of Marsh Valley.) Still, we managed to make our way through the throngs and get a few things that we wanted.

At one point in my store wanderings I saw the nasty, haggard line-crowder from earlier. I really wanted to ram my shopping cart into hers, but again restraint got the better of me, and I did nothing. (It's a good thing I'm such a damn nice guy.)

Then it came time to check out. And wait in line again. The line for the registers ran from the front of the store, all the way up and down every aisle in the grocery section to the back of the store, through the frozen foods, and into the towel and bath mat aisles. It was a fairly fast moving line, but a long line nonetheless. As we weaved through the food aisles, it gave us a chance to look at all the foodstuffs that Target has for sale. And how high their prices are. And why we never go grocery shopping there.

About three-quarters of the way through the line, a man with a tv tried to scooch in front of us. The Wife then, in her best junior-high-math-teacher voice, said, "Excuse me, I think you need to go to the back of the line." The guy looked startled, mumbled some crap about not knowing this wasn't the end of the line, then shuffled off with his tail (and tv) between his legs. With that tone in her voice, I could see why the junior high kids think she is the "mean" teacher. (And I was very proud of her as she sent tv-boy moping away.)

It took us a half an hour to get from the back of the line to the registers. We paid for our things and escaped. All told, it took us about two and a half hours to get $40 worth of board games and pajamas for the kids. It was an interesting experience, but I don't think I'll be doing the "Black Friday" shopping at Target again.