I like to think of the entire field of presidential candidates as vegetables. There are very few vegetables left at the serving table. Most are already gone. Most were better than the options we have left.
Here is our presidential candidate vegetables table:
Ted Cruz: brussels sprouts—a strong, acquired taste that most people don’t like.
Marco Rubio: zucchini—people generally like zucchini, but it’s never their favorite vegetable. It’s always the second or third choice.
Ben Carson: artichoke hearts—I really like artichoke hearts, but I’m not really sure how to get to them, because I don’t have a lot of experience doing so.
Jeb(!) Bush: canned green beans—safe, familiar, and about as exciting as….a can of mushy green beans.
Chris Christie: cabbage—you might be able to make a few good things with it, but in the end it’s just going to stink up your whole house.
Carly Fiorina: celery—bland and uninteresting, unless paired with Cheez Whiz or peanut butter. (I don’t know who Cheez Whiz or peanut butter are in this analogy, just that celery is apparently not popular when paired with brussels sprouts!)

John Kasich: parsley--it's there on your plate, but no one knows why. No one ever asks for parsley. No one ever wants parsley. It's just there. The parsley thinks you will be grateful for it when the rest of the food is gone from your plate, but the truth is even then you probably won't notice it. In fact, now that the parsley is gone, does anyone really care?
So, that leaves us with the candidates who are left in the field. Here they are:
Hillary Clinton: green peppers—people who don’t like green peppers really don’t like green peppers! (Personally, I can’t stand green peppers.)  But, there are plenty of people who do like green peppers. Green peppers want attention. They demand to be seen. They are desperate for power, so they often overpower the flavor of those around them. “I’m a green pepper, damnit! You will like me!” (“Or else….”)
Bernie Sanders: kale—kale is very trendy. Most of the hip, young, idealistic people like kale. They think it is the vegetable that will save the world. And while there are a lot of positives about kale, it is also pretty limited. There is only so much you can do with kale. As good as it is, kale can’t change the world. It will never take the place of all the other vegetables, no matter how hard the hipsters try to make it do so.

And, finally, there is:
Donald Trump: rat poison—I know I’ve been comparing all the other candidates to vegetables. And I know that rat poison isn’t actually a vegetable. But, Donald Trump isn’t like any of the other candidates. Rat poison gets all the attention. If you had a vegetable tray, and in the middle of it was some rat poison, well, the rat poison is all anyone would talk about, no matter how tasty or dynamic any of the vegetables might be. And, because most of the vegetables left are so bland, people might actually talk themselves into trying some rat poison. The justifications might include: “I’ve tried most of these vegetables, and I don’t like them. Rat poison has got to be better than them, doesn’t it?” Or, “Sure, it’s rat poison, but it probably won’t hurt me. I’m not a rat.” Or, “I am so sick and tired of vegetables! I want to try something different. I think I'll try rat poison!” Or, “Rat poison really tells it like it is! Who wants rats around, anyway?” 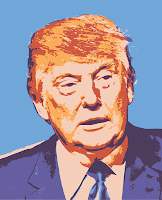 Are these really the best choices we have? Where the heck is the broccoli when you need it?
Is there asparagus anywhere???
What I wouldn’t give for a good pea pod!!!

"Donald Trump" and "Poison" pictures courtesy of the website Pixabay.