Friday Fiction: The Curse of the Nurse Costumes

Jessie had never been fond of Halloween.

She wasn't sure why. It's possible it started that year her mom made her dress up as a Skittle and she had to spend the whole night explaining to people that she was a Skittle, not an M&M. "See," she would say as she pointed to her chest, "It's an 'S,' not an 'M.'"

She pulled up to the Costume-A-Rama store and found a parking spot. She'd seen their billboard and heard their ad on the radio. She'd also already been to Walmart and Target, and their costume sections were pretty well picked through. It was the day before Halloween, so if she couldn't find a costume at Costume-A-Rama, she probably couldn't find one anywhere.

She stepped into the store. It was bigger than it looked. And, yes, they did still have quite a selection of costumes. She started to look down each aisle to see if she could find what she wanted. She was startled when the voice over her shoulder said, "Welcome to Costume-A-Rama! Can I help you find anything?"

"Yes," Jessie replied. "I'm looking for the nurse costumes." Gary had suggested that they go to the party as a doctor and a nurse. They'd only been going out for about three weeks, so she thought it a little odd that he try to dictate to her what costume she wear. But, a nurse costume seemed simple enough, and she really didn't want to put the effort into something more creative.

"The nurse costumes are down Aisle D, over on the left," said the helpful employee.

"Thanks," Jessie said. The employee gave her a nod of acknowledgement, then walked away. Jessie watched as he then snuck up behind another customer and startled them with his offer to help.

Jessie walked down Aisle D and found the nurse costumes. She pulled the first one off the rack. "Sexy Nurse," it said on the tag. There was a picture of a woman in the costume, to show the consumer what the product looked like. The woman in the picture was wearing a short, white "nurse" skirt with a low cut neck. About 90% of the woman's legs were exposed below the skirt, and about 60% of her breasts were showing above it. 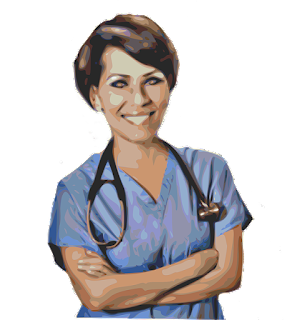 The next night, Jessie arrived at the party feeling pretty good about herself. Everyone was in costume. She knew a lot of the people there, but she could only recognize a few of them. She was looking for Gary, but couldn't see him yet. She did see Sheldon and Suzanne, and she said her hellos to them. They had told her earlier that they were coming as Donald Trump and Hillary Clinton. They both looked fantastic, although Jessie wasn't quite sure which one was dressed as Trump and which one was dressed as Hillary.

Finally, she saw Gary at the back of the room. He was dressed in doctor's scrubs, with a stethoscope around his neck. "Well, hello there, Dr. Gary," she said enthusiastically.

Gary smiled as he heard her voice, but the smile faded as he looked her over. "That's what you're wearing?" he asked with more than a hint of disdain in his voice.

Jessie was confused. "Yes," she said. "Is there a problem with it?"

"Umm," Gary muttered, "I thought you were going to dress as a nurse."

"I am dressed as a nurse," Jessie replied. "My sister Janice is a nurse, so I borrowed some of her scrubs." She threw her arms into the air, as if to present herself. "What do you think?"

"Umm, well, I thought you were going to wear a nurse costume," Gary said.

"This is a nurse costume," Jessie replied. "This is a costume worn by an actual nurse."

"But I was thinking something more, I don't know, sexy," Gary said.

"Really?" Jessie replied. "I'm not sexy enough for you?"

"No, that's not what I meant," Gary sputtered. "I just thought that your costume would, you know, show a little more."

"Oh, you know," Gary continued, "a little more of you. You're so hot that I thought I'd like to see a little more of your body. It's a great body." Gary added that last sentence in an attempt to get himself out of the hole he had been digging. Instead, he only dug himself a little deeper.

Jessie thought for a moment. "What about your costume? You've got a great body, too. Why can't I see some more of it?"

"Oh, come on," Gary retorted. "This is how doctors dress!"

"And this," Jessie said as she waved her hand from head to toe to show off her costume, "is how nurses dress!"

Gary looked flummoxed. Jessie stepped a little closer to him and patted him on the shoulder. "Gary," she said, "I'll be seeing you around. I'm going to go and enjoy what's left of this party. And the next time you see me, no matter what I'm wearing, I'll be dressed as your ex-girlfriend."

Gary stood with his jaw agape as Jessie walked away. She had a satisfied smile on her face as she wandered through the crowd. She saw Donald Trump and stopped to talk to him. (Or was it Hillary?)

O A. Sexy Nurse
O B. Naughty Nurse
O C. Drama at the Costume-A-Rama
O D. The Nice Nurse and the Naughty Doctor
O E. Harry Potter and the Goblet of Fire
Posted by Slow Joe 40 at 9:12 AM