My two year-old son just climbed into his bed, grabbed his blanket, and curled up for a nap. Let me say that again: He just put himself down for a nap!!!

This never happens. It's usually a big fight to get him to take a nap. I'll put him in bed and the two of us will race to the door of his bedroom, me hoping to shut him in, him hoping to escape into the outside-of-his-room world. Or, I'll try to grab him to put him in his bed and he'll dodge this way and that way, and when I finally do catch him he will literally be kicking and screaming as I put him in his bed. (And on those days when I don't feel like fighting him to take a nap, he'll fall asleep in his dinner, wake up an hour later, then stay up until midnight.) 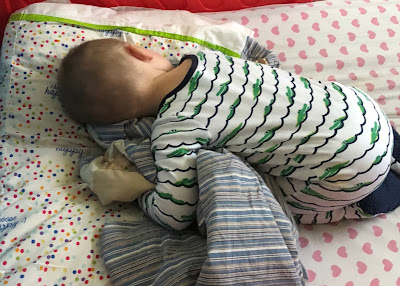 He put himself down for a nap, and the world suddenly became an easier place to live. Wouldn't it be great if other difficult and troubling things just took care of themselves?

Wouldn't it be great if all politicians started telling the truth? If they could work together with members of the opposite party for actual compromise?

Wouldn't it be great if drivers stayed out of the left "passing" lane unless they were actually passing someone?

Wouldn't it be great if the kids started doing their chores without having to be reminded?

Wouldn't it be great if Walmart had more than two checkout lanes open?

Wouldn't it be great if that one co-worker who calls in "sick" every holiday would actually come in to work so that you could take the holiday off every once in a while?

Wouldn't it be great if every time you went to the doctor's office you got a clean bill of health?

That'd all be great, wouldn't it? Unfortunately, we live in the real world. In the real world my son started yelling for me ten minutes after he put himself down for a nap. He had pooped his pants, and I had to deal with it.

Wouldn't it be great if we lived in a world where people didn't poop their pants? (Especially the politicians!)