The Men's Room at The Fabric Store

[The preceding paragraph was brought to you by sarcasm.]

We were on a family shopping excursion, and we made a stop at The Fabric Store. (Not its real name. I don't need any lawsuits.) Unfortunately, earlier in the day we had eaten at a restaurant that serves all-you-can-eat breadsticks, and I suddenly realized I was going to have to spend some time in one of the loneliest places in the known world: The Men's Room at The Fabric Store!

I wondered, for a brief moment, if they even had a men's room at The Fabric Store. Well, of course they do. But, does anyone ever go in there? As I approached, I imagined a pristine, sparkly-clean, never-been-used place.

I opened the door to find a large, filthy, stinky room. I was surprised how big it was. It easily had room for two or three stalls and another three or four urinals. But instead, there was just a toilet and a sink in the corner, and a lot of open space. Since there was only one toilet inside, I was forced to lock the door behind me. (Don't want anyone walking in on me while I'm seated. It would be even more awkward than usual with all that extra space in the room.) 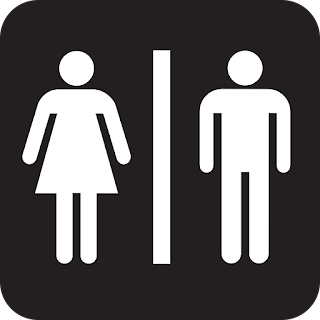 I walked over to the toilet and was pleased (there's that sarcasm again!) to see the toilet seat covered with another man's urine. (I've said before that I thought "Another Man's Urine" would make a really good name for a really bad rock band. Either that or the title for the next novella by Stephen King.) So, before I could sit down to do my business I had to clean off the seat.

Having cleaned the seat to the best of my ability, I sat to take care of the things I went into that room to take care of. All was fine until two minutes later when the room went completely dark. Motion lights!

And that, of course, is when I found that the men's room at The Fabric Store is not the loneliest place in the world. Because that is when someone came to the door and wiggled the handle, trying to get in. I wondered if they could see from the crack at the bottom of the door that it was dark inside. What kind of weirdo would lock himself into the men's room at The Fabric Store in complete darkness? I worried that they might try to go find a manager to open this locked, "empty," men's restroom.

Finally, after finishing up on the toilet and doing a few jumping jacks in the vast expanse of the room, I was able to convince the motion lights that yes, indeed, the room was occupied and that the lights should be on. I was positive that my experience in the men's room at The Fabric Store couldn't get any worse. And then it did.

I then turned off the water and reached for a paper towel. Yes, you guessed it, no paper towels! Not even an ineffective hand dryer blower. Just an empty paper towel dispenser. So, I was forced to do the hand hokey pokey (you put your right hand in and you shake it all about) with both of my hands to shake as much of the water off as I could. Then I used my pants legs as towel stand-ins. (I was grateful that I wasn't wearing shorts.)