4 Things I Learned From My Kid's Sick Day

I got a call from school. The Boy said he was sick and wanted to come home from school. Here are a few things I learned from my son's Sick Day.

1. Every parent has their own mathematical formula to determine if their child is sick enough to come home from school.  (And it's different for each child.) For this child, the formula was:
a) how sick the child was before school (in this case, not at all)
plus
b) the likelihood the child would try to fake being sick (not very)
plus
c) how skilled the child would be at faking if they tried (not very)
plus
d) trust in the teacher's ability to tell if child is faking (pretty high)
plus
e) how sick the child actually sounds (fairly high)
plus
f) how often the child has tried to come home from school sick (his first time)
plus
g) is there something happening at school that they want to avoid (not that I was aware of.) 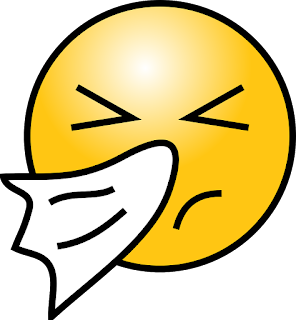 2. If a child tells you, "I have a cough," they will immediately follow that up by coughing. This cough will be pathetically fake. It doesn't matter if the child has an actual cough or not, that first "see, here's proof that I have a cough" cough will be fake. (In this case, once we got home it was obvious that The Boy had a real cough to go along with his fake one.)

3. How sick a kid actually is is directly proportional to how many "fun" things they want to do when they get home. The rule in our house is that if you come home sick from school, you don't get to watch television, play with friends, play with toys, or do anything considered "fun," with the possible exception of reading a book. You get to rest in bed and eat, and that's about it. (In this case, The Boy wanted to play a couple of times, but mostly stuck to his bed, even getting a bit of a nap.)

4. Unfortunately, once a kid comes home from school sick, he will be much more likely to want to do it again. Our oldest daughter absolutely loves school. She loves her friends, she loves her teacher, she loves reading, she loves her school work. And yet after her teacher sent her home sick one day a while back, she ended up missing several days in the next week. Part of it was because she was a little sick, but part of it was also because she liked the extra attention that came with being sent home sick.

It wasn't all bad this time, though. My two year-old was so thrilled to have her big brother home that she followed him and shadowed him the whole day, which meant she wasn't following and hounding me all day. (At least until he locked her out of his room.)