"Well, thank you very much," Jimmy's mom said to Mr. Eller as they both got up out of their chairs.

"The pleasure's all mine," said Mr. Eller as they engaged in a solid hand shake. "Jimmy is a very good student. I wish I had more like him." Jimmy's mom smiled as she turned away, looking for the next teacher on her list, Mrs. Krause, the Spanish teacher.

Mr. Eller relaxed for a moment and took a swig from his water bottle. He looked at his watch. An hour and thirteen minutes into parent/teacher conference and so far it had been a very pleasant evening. Sometimes it went that way. Sometimes it didn't. Tonight, it wouldn't. 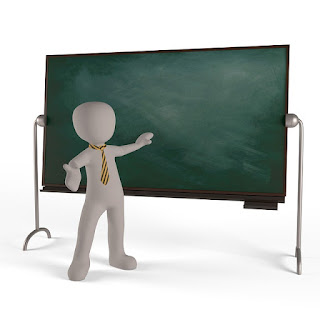 "My son is in your class, and he says you are mean, and a jerk, and out to get him," the woman said. Her  arms were no longer folded. Instead, she had an accusatory finger pointing in the direction of Mr. Eller.

"I'm sorry to hear that," Mr. Eller replied. "I may be mean sometimes, but I really try hard to not be a jerk, nor do I try to be 'out to get' anyone. May I ask who your son is?" Mr. Eller had a pretty good idea who her son was, but there were two or three other possibilities in his mind.

"My son is Akron. He is in your third period US History class. Do you even know who he is?"

Just as Mr. Eller had suspected: Akron. Upon closer examination, he had seen that scowl before. Apparently, scowls can be hereditary. "Yes, I'm quite familiar with Akron," Mr. Eller replied. "He can be a really good student when he tries." ("It's just that I've never seen him actually try," thought Mr. Eller.)

"He's not getting a passing grade in your class. Why is that?" asked Akron's mom.

"How can he get his grade up? He wants to go to an Ivy League school someday, and he can't have an F in 8th grade US History!"

(Ivy League? The only ivy this kid might have a chance to get into is poison ivy!) "Well, the grade is based 20% on assignments, 20% on tests, 20% on his report paper, and, because of a district mandate, 40% on attendance. Unfortunately, Akron needs work in all of those areas."

"Akron is very smart and a very good student. I demand to know why you have it out for him!" Akron's mom's face was getting redder by the minute.

Mr. Eller tried to remain calm. "As I said, 40% of his grade is attendance, but he has already missed 14 days. That's a lot of days. And he still hasn't made up for the assignments he missed on those days."

"We needed to see my sister in Spokane," Akron's mom said. "He learned a lot on his trip to Spokane. It's a very historical city, you know. He probably learned more about US history there than he would of in your class!"

(Spokane? Yes, Spokane is surely one of the most important cities in all of American history!) "He said something about going to Disneyland," Mr. Eller replied.

"Yes, we went to Disneyland, too. You can't tell me your little history class is more important than Disneyland! He learned a lot about history at Disneyland!"

(Yes, I'm sure he learned that Johnny Depp was a pirate, Sheriff Woody saved the old west, and it really is a small world, after all!) "I'm sorry, but attendance is actually important. His grade reflects that."

"And what about his paper?" she asked. "How could you give him an F on his paper? He worked so hard on that!"

"Oh really? How do you know that? Do you have Wikipedia memorized or something?" Akron's mom was flaring her nostrils.

"No," Mr. Eller replied. "But I know it was from Wikipedia because it had said 'Wikipedia' up on the corner of the page. He printed it out directly from the Wikipedia page."

"What, and you won't accept that? I'm sure he's not the only kid who got his stuff off of Wikipedia."

"No, but he was the only one who handed in a page printed directly from Wikipedia. The other kids at least copied and pasted or paraphrased it."

"You just have it out for Akron!" she shouted. "He says you won't even let him use his cell phone in class!"

"I'm sorry, but cell phones are not allowed during tests," Mr. Eller said. "District policy says we can no longer confiscate cell phones, but they must be put away during test times or they can look up answers on the internet."

"What's wrong with that?" Akron's mom asked. "You just want them to fail, don't you?"

"Well you're not going to get away with failing my Akron! I know the principal, and I'm going to have a nice chat with him!"

"What a coincidence, I know the principal, too," Mr. Eller replied. He had tried to keep his snarkiness under control, but it was starting to leak out. "Enjoy your chat with him."

As Akron's mom stormed out of the gym the eyes of several other parents followed her. Mr. Eller leaned back in his chair, took another swig from his water bottle, and thought of a topic for the next assigned paper for his class: Spokane and its importance in the Civil War.

Now choose a title that best fits this story. Fill in the circle completely, or your answer will be marked incorrect.

O A. My Son Can Do No Wrong.
O B. You Want My Son To Fail, Don't You?
O C. Johnny Depp and the Other Important Pirates of History
O D. Parent/Teacher Conflagration
O E. Harry Potter and the Half-Blood Prince