I was going to sit down this morning and write one of my usual attempts at humor, but it just didn't feel right. It's September 11th, and I've got a few more serious things on my mind. (Don't worry, I'll be back to posting about farts on Tuesday.)

Those of us who are old enough remember where we were 14 years ago when we heard the news. First, a plane into one of the towers. What a horrible accident! And then came the second plane, and we knew that this was not an accident. It was an act of war. Then came the plane at the Pentagon, followed by rumors of planes everywhere. Luckily, only one more airplane went down, filled with brave people who made the ultimate sacrifice to make sure more weren't hurt.

It was a crazy day; a scary day. But, in the days that followed there was good. The country came together as one. Race, religion, gender, sexual preference, political beliefs: none of it mattered. We were unified as a nation. We were the United States of America!

Here's a simple rule I try to live by, and I think you should, too: Don't kill anybody! It's not that hard. I've lived a lot of years and I haven't even come close to killing anyone, not even the customer service guy from the cable company.

I understand that there can and should be outrage when someone in police custody is injured or killed due to excess force. Do some members of the police force overstep their authority and act out in an overly aggressive manner? Yes. But, the vast, vast majority of them do not. Punishing everyone for the act of the few has never made sense. It didn't make sense when the teacher kept the whole class in for recess because one kid threw a spitwad, and it doesn't make sense now.

The killing of random, innocent police officers and firefighters in retaliation for the acts of a select few is idiotic and nonsensical, and it has to stop. Police officers, firefighters, and soldiers put their lives on the line for us every day. They do so to serve us and protect us. They shouldn't have to fear us. 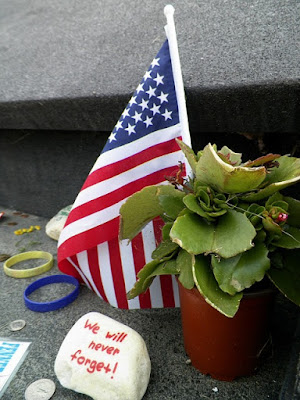 There was a time, not that long ago, when we were united as a nation. We've lost a lot of that feeling. Let's hope that it doesn't take another tragedy like 9/11 to bring us together again.

Let us not let the deaths of all those people on that terrible day in 2001 be in vain.

Let us be kind, considerate and helpful to others like we were in the months after that day.

Let us remember what they did for us.