The Day After Christmas (a Poem)

Christmas is over! Long live Christmas!

'Twas the day after Christmas, and all through the house,
All the garbage was strewn on the floor and the couch;

The stockings, once hung by the chimney with care,
Were down on the ground, contents flung everywhere.

The children were still nestled snug in their beds,
Asleep, with their favorite new toy by their heads;

And Momma and I, still in need of a nap,
Were staring at wrappings no longer a-wrap.

Looking over the living room, so full of clutter,
That I thought it was hopeless and started to mutter;

There was paper, and boxes, packing peanuts, and more,
There were those stupid twisty ties-- all over the floor.

Then, all of the sudden, I moved like the Flash,
And gathered up garbage to throw in the trash;

The Wife and I picked up and swept with the broom,
And worked 'til we'd cleaned up most all of the room. 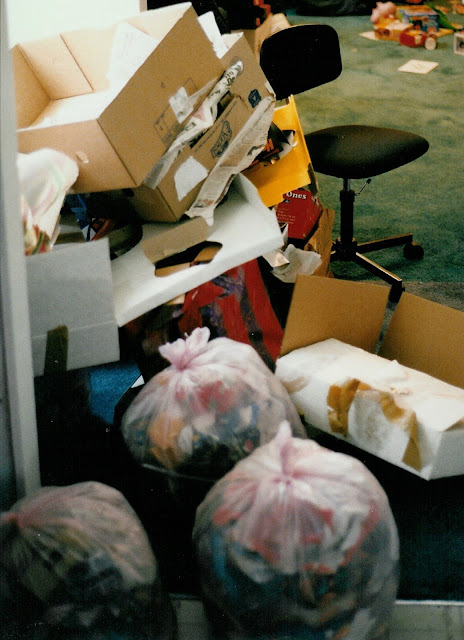 When what to my wondering ear did appear,
But the sound of the garbage truck rumbling near;

With a little old driver, all bearded and thick,
That he looked, for a moment, like a grungy St. Nick.

I gathered my bags and I ran to the street,
For I knew that the garbage truck I had to beat;

'Else I'd live in a house full of garbage all week,
And if it sat around that long, no doubt it would reek.

I stuffed bags in my dumpster, one, two, three, and four,
And when I thought it was full, I stuffed in several more!

I filled it so full I could not close the top,
It was bursting with garbage; it was ready to pop.

Then the truck it approached, and it was sort of smelly,
It picked up my trash and dumped it into its belly.

And dropping my empty bin back to the ground,
The truck pulled away with a loud revving sound.

And the driver yelled out as he left in a streak,
"Merry Christmas to all! I'll be back here next week."