On September 10, 2001, they went about their lives like any other day. Maybe they turned on the television and watched The Weakest Link, or stayed up late catching the Denver Broncos beat the New York Giants 31-20 on Monday Night Football.

Maybe they kissed their kids goodnight. Maybe they finally got around to making that call to see how their Mom was doing--the call they'd been meaning to make for the last couple of weeks.

Maybe if they knew what was going to happen the next day, they would do everything different. Maybe they wouldn't change a thing. 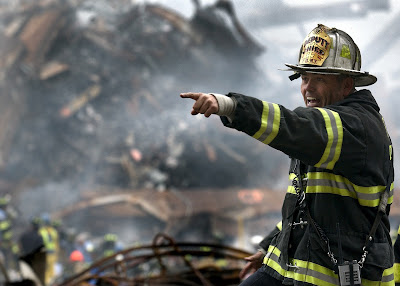 Many of the people who died on September 11, 2001 did so simply because of the circumstances of the day. They went to work, or got on an airplane as if it was just another ordinary day. It wasn't.

But, many of the people who died on September 11, 2001 did so of their own free will. They didn't choose to die, and they didn't want to die, but they were willing to risk their lives in order to help others. They put their own lives on the line so that they could save the lives of others. (For some, it's what they do every day.)

I can't imagine the courage it would take to run into those burning buildings.

There are a lot of lessons we can learn from that horrible day in 2001:
*Make the most of every moment, because you never know what day will be your last.
*Be grateful for the courage and bravery of those who willingly face possible danger every day in order to serve and protect their communities and nation.
*Remember the unity we felt as a nation after those disastrous events. For a brief moment, political affiliation meant nothing; we were the United States of America.

It was a terrible day. Let us not forget what happened. Let us not forget those who lost their lives. And let us always remember to work together as communities and nations, so that the sacrifices they made be not in vain.
Posted by Slow Joe 40 at 12:54 PM