It's one of the basic rules of parenting: If you say bad words, your kids will hear you.

I know this rule. I also know that profanity is absolutely worthless. It does no good whatsoever! And yet there I was, cursing at my computer. And there my daughter was, listening to every nasty word. 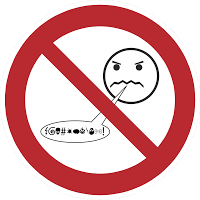 Why was I swearing at the computer? Facebook did a poor job of cropping a picture I posted. I had a perfectly good photo of a blueberry muffin, which was centered nicely in the frame: 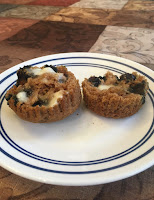 For some reason, Facebook decided the edge of the plate and the tablecloth were more important than the muffin: 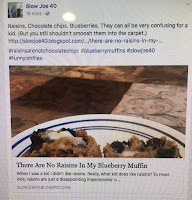 I tried a couple of tricks I've used in the past to fix the Facebook cropping problem, but they didn't work. So, I turned to a profanity laced tirade. That didn't work, either. And when I turned around, there my daughter was, secretly listening.

(It's amazing how stealthy the kids can be when you don't want them to be. Usually I can hear her stomping, singing, whistling, or whining. But, no, this time she decides to use her heretofore unknown ninja skills!)

My immediate reaction was, "How much of that did she hear?" I quickly disregarded that line of thought because she didn't have to have heard much for it to have been too much. I was busted.

I then went straight into apology mode. "I'm sorry I said those things. I shouldn't have said those words. It was a stupid thing for me to do. I was behaving like a brat." (We've been talking to her about bratty behavior since watching the movie Despicable Me 3 and its villain, Balthazar Bratt. After doing something wrong she said, "At least I'm not as bratty as Balthazar Bratt." We explained to her that comparing herself to a movie villain probably wasn't her best defense.)

She sat quietly for a couple of minutes, then asked, "Dad, why do you say those words to the computer? It's not like the computer is going to hear you and react." Or course, she was right. Profanity is bleeping stupid! It serves no purpose whatsoever.


The weird thing is that I don't swear at all...when I'm around other people. I don't want to be that guy who swears. But, if I'm all alone, the words sometimes ooze out of me. All those years of driving truck and working with cows spews from my mouth. (I should note that not all truck drivers swear. And I would like to think that there are some people who work with cows who don't swear. I've just never met any of them.)

So, how do I keep myself from swearing? I guess I could just use simple self control. (And while I'm at it I could run five miles a day and eat kale or some other vegetable that is good for me at every meal.) (It's probably not going to happen.)

Maybe my best bet is to pretend one of my kids is listening to everything I say. If I act as if one of my kids is within earshot at all times, I'll be less likely to use profanity. It's not like it's much of a stretch, because if I ever do say something I shouldn't, my kids will hear it. (They've got some mad ninja skills.)
Posted by Slow Joe 40 at 6:20 AM