For my birthday my in-laws got me tickets to the first annual Salt Lake Comic Con. I was giddy with anticipation for: the vendors with hard-to-find comic books and comic book merchandise; the fun of seeing people in creative and outlandish costumes; and even for seeing some of the "stars" in attendance.

So, once again I'm going to steal borrow the format from ESPN and Grantland.com's Bill Simmons, and give you a "Running Diary" of Day One of the Salt Lake Comic Con.

Day Before Comic Con, 4:08 PM: On their Facebook page, Salt Lake Comic Con says, "Be sure to tune in to tonight's 10:00 PM news for a major announcement of a new "Special Guest" coming this weekend!"

Now, since the Comic Con was first announced, a few changes (mostly additions) had been made to the guest list. Jonathan Frakes (Commander Riker from Star Trek: The Next Generation) dropped out because of a scheduling conflict between Comic Con and Patrick Stewart's wedding. We quickly learned that Captain Kirk (William Shatner) was not invited to Captain Picard's wedding, because Shatner moved in to take the place of Frakes at Comic Con.

By the time of this "major announcement," the "Special Guests" were William Shatner, Adam West and Burt Ward (Batman and Robin from the 1960's television show), and Henry "The Fonz" Winkler. So, there was rampant speculation as to who the new "Special Guest" would be. Since the other "Special Guests" were icons of 60s and 70s television, my mind went along those lines. And my thoughts soon went to one person: Lynda Carter!
If Lynda Carter were to attend Comic Con, my interest in the "stars" would immediately shift from "somewhat interested" to "Dang! I gotta be there!"

Day Before Comic Con, 9-ish PM: Around here there is a colloquial saying for having to get up early in the morning to go to work. It is: "Getting up at the butt-crack of dawn." Well, for my work I have to get up three butt-cracks before dawn, so I had to go to bed before the big 10:00 PM announcement.

Day of Comic Con, 2:30 AM: I can't sleep because there might be a very slight, very remote chance of meeting Lynda Carter. I shut off my alarm (which would have gone off at 2:35 AM, anyway) and hop in the shower.

Stan Lee is the most accomplished comic book writer of all time! With the help of his artists, he created Iron Man, Spider-Man, The Fantastic Four, The Avengers, The Hulk, Thor, Daredevil, The Silver Surfer, Dr. Doom, and many, many more! In fact, an argument could be made that Stan Lee is the most influential writer (of any kind) of the 20th Century!

But he's no Lynda Carter.

2:24 PM: Arrive home. Hop in the shower again. (Yes, I already showered in the morning. But, I figure that there will be plenty of hygienically challenged people at Comic Con. I don't intend to be one of them.)

3:13 PM: Drop the kids off at The Wife's school. (It's one of their favorite places in the world.) (They like it much more than the junior high kids who actually attend it do.)

4:51 PM: While in line, I spot my first celebrity!
4:57 PM: Still in line, seeing more and more people in costume.
5:02 PM: The line finally winds its way inside the building! I am now inside at Comic Con! Unfortunately, that doesn't mean I'm done standing in line, because inside the line looks like this:
5:15 PM: While standing in line, one of the most common things overheard was people asking, "Who is that supposed to be?" about other people dressed in costume. The answers would be interesting. Some guys had to prove their know-it-all-ness by confidently stating who each costume or t-shirt was supposed to be depicting, whether they were actually correct or not.

Me? I probably knew who about half of the costumes were supposed to be. I have large gaps in my nerd knowledge. I don't know much anime, or fantasy, or video game characters. And, I'm a little shaky on comic book characters introduced after 1993.

5:32 PM: I'm finally at the front of the line! I get my entry wristband and my "swag bag." Everyone who bought the three-day pass for Comic Con was promised a "swag bag" full of "pop culture merchandise." So, what was in my "swag bag?" A Comic Con program and a small, mass-produced poster which featured a drawing of most of the "stars" who would be appearing. That was it.

The bag was not very swaggy.

5:36 PM: Now that I'm officially inside the Comic Con, I wander around for a bit. I get up on the second floor to overlook the main Exhibit Hall. 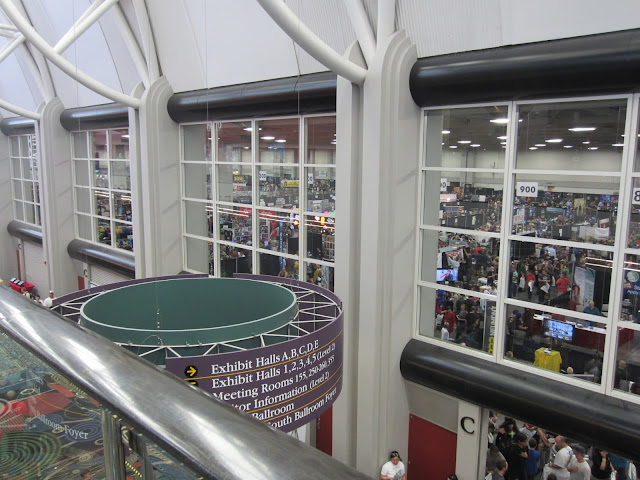 6:02 PM: This was a much faster moving line. Only ten minutes! And now, I am actually in the Exhibit Hall! (Unfortunately, so are approximately 30,000 other people.)

6:04 PM: I try to work my way through the throng to see what some of the vendors have to sell. There is some cool stuff. I really liked these posters.
But, as a semi-responsible adult, I just can't really see a place in our house where I could hang a poster. (I guess I'm not a teenager anymore.)

Some of the vendors had things I wasn't interested in at all.
6:37 PM: Eventually, I worked my way to the back of the Exhibit Hall where the "stars" were. The "stars" were lined up behind tables, each with a big picture of themselves to remind the fans of who they used to be.
Of course, in order to get in one of those lines to actually meet and/or talk with the "stars," you had to be willing to pay extra for their autographs or to have a picture taken with them. The extra pay was usually between $30 and $50. (Shatner was $75.) And, I found out later that some of the "stars" would not accept credit cards. Some of them were "cash only."

Not all of the "stars" were in their booths that night. (Shatner and Stan Lee were only appearing on Saturday.) Among those who were in their booths while I was there were:
Kevin Sorbo (Television's Hercules.)
John De Lancie ("Q" from Star Trek: The Next Generation.)
Adrian Paul (Television's Highlander.)
Lou Ferrigno (Television's Incredible Hulk.)
David Prowse ("Darth Vader" from Star Wars.)
Peter Mayhew ("Chewbacca" from Star Wars.)
Ray Park ("Darth Maul" from Star Wars.)
Dwight Schultz ("Barclay" from Star Trek: The Next Generation. Also from The A-Team.)
Dirk Benedict (From the original Battlestar Galactica and The A-Team.)
Richard Hatch (From the original Battlestar Galactica.)

Also, three of the original Mighty Morphing Power Rangers were there, along with a Hobbit, a couple of women I had never heard of, and that one guy from that television show about witches that I never watched. (Brian Krause from Charmed.)

Unfortunately, one person who was scheduled to appear that I didn't see while I was there was Dean Cain (Superman/Clark from television's Lois & Clark.) The Wife really likes him, and I might have actually paid the extra to get a picture of me with Mr. Cain. But, I didn't see him.

Surprisingly, all evening long the longest lines were to see Ray Park, who played "Darth Maul" in the fourth Star Wars movie. (You know, the one that was supposed to be the first Star Wars movie.) Some of the "stars" would drop in and out of their booths, while others were there every time I walked by. I'm not sure if that meant they were the friendliest and the best for their fans or if meant they were the ones most desperate for the extra cash from the autograph seekers. (Maybe both.)

7:09 PM: As I wander, I get to look at some pretty awesome costumes. Here are a few highlights:
And then there was this Star Wars guy:
More Star Wars:
And, one of my favorites:

Of course, there were a lot more people in cool costumes, I just didn't take pictures of all of them. Some costumes were professional looking, others were obviously homemade. (Others still looked as if they had made by drunken frat boys with no sense of fashion.)

I was somewhat surprised by the distribution of some of the costumes. By far the most common costume  was of comic book character Deadpool. I'm not sure why. (I'm not very familiar with Deadpool. He's too "new" for me.) Meanwhile, I was surprised to see only one Wolverine the entire evening, and that was an attractive female in a spandex Wolverine costume. (No picture available, for reasons stated above.)

The most popular female costume was some variation of either Catwoman/Batgirl/Female Batman.  (Usually black tights and a mask, with or without some kind of "Bat" symbol.) There were, of course, lots of male Batmen, too. I was surprised, however, by how many Robin costumes there were. Robin? Really? Lame Robin in his red, green and yellow costume?  I don't get it.

The majority of Comic Com patrons opted for my simplistic costume idea: a t-shirt with some sort of connection to comic books or science fiction. And there's nothing wrong with that. (I saw several other people in Green Lantern shirts like mine, but I didn't see anyone else use the red-shirt-under-the-Green-Lantern-shirt look to make it more Sheldon Cooper-esque.)

7:38 PM: Thought about getting something to eat. Looked at the prices. Decided I could get something on my way home.

7:58 PM: The Exhibit Hall is supposed to close at 8:00 PM. I am on my way out when they announce that they will keep it open until 9:00 PM. I decide to leave anyway. It's been a long day. (Three butt-cracks before dawn was a long, long time ago in a land far, far away.) (You know, now that I think of it, I may have seen someone in a "three butt-cracks before dawn" costume.)

On my way back to the car I walk past a zombie. I think I know how he feels.