Wasn't That a Party?

It's the morning after the party. I'm a bit groggy. (I'm in a weird spot where I can't sleep, but I also can't keep my eyes open.) The house is a mess. There are streamers, balloons, confetti, wrapping paper, and red Dixie cups strewn about. Pirate flags are draped above my chair. A busted-up pinata is hanging from a beam between the living room and the kitchen. And, to top it all off, I'm seeing unicorns.

I think I have a hangover from the party. My five-year-old's birthday party.

(Oh, don't worry. The only thing that was in those red Dixie cups was water.) What I didn't understand, until after the fact, was how completely exhausting it is to throw a birthday party for a bunch of four and five year-old kids. (And I say this even with the full realization that The Wife did the vast majority of the work for the party.)


It all started several weeks (probably even months) ago, when The Wife thought it might be a good idea  for Roni to have a birthday party with kids her own age. Roni has spent her whole life mostly around adults. (On my side of the family, Roni's nearest cousin is eight years older than her; on The Wife's side of the family, Roni is the oldest.) She is used to adults doting and fussing over her. And, when she is around kids her age, she doesn't interact with them much. So, The Wife hatched a birthday party plan.

So, as the weeks passed and the birthday approached, The Wife gathered more and more pirate and fairy stuff, and she planned out the party. She got invitations and sent them out, then planned some more. Meanwhile, as she was doing all of this, I was sitting in my chair eating potato chips. (And occasionally passing gas.)

Eventually, the day before the party arrived. That's when it got real. That's when I realized we were going to have between two and twelve screaming kids running through our house. I wasn't ready. The Wife, however, was.

I had to work the evening shift the day before the party. While I was working, The Wife got the house decorated. (Banners and flags and the piñata.) She also was able to bake and decorate the cake. It looked incredible! (See for yourself.) (The "sand" is crumbled up Fudge Stripe cookies!) 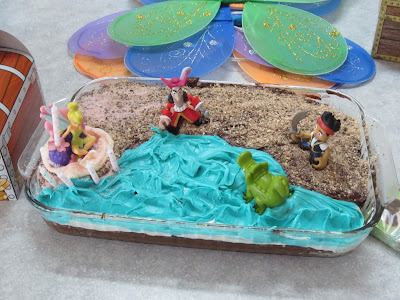 On the day of the party, I got home from work around 3:00 AM. I got almost three hours of sleep before The Wife's alarm woke me up. She got ready and went to work. (She teaches junior high math.)   Before she left, she told me that Roni would probably sleep late, because she had a hard time going to bed because she was so excited for her birthday. Nope. When I got out of the shower at around 7:30, Roni was already up.

The Wife was very well prepared for the party, but she did leave a few things for me to do. They were mostly cleaning chores, like mopping the kitchen floor and cleaning the kid's (guest) bathroom. As I was doing these chores, I felt a bit like Cinderella (except not quite as pretty.) But, after the party was over and I realized all the work The Wife put into it, I felt a little foolish for my feeble contributions.

Finally, the appointed hour arrived. The first guest appeared. And that's when I earned my keep. I went to get Roni's little brother, Buzz, up from his nap to join the party. And, of course, the boy chose that moment to poop through his diaper. I quickly assessed the situation. Normally, a poop-through would merit an immediate bath, but due to the guests arriving I decided a thorough wipe-down with wet-wipes would have to suffice. (It took about twenty wipes to do the job.)

The Wife had a system set up for when the guests arrived. They would get to choose between being a pirate (and be given a pirate hat and an eye patch) or being a fairy (with accompanying fairy wings and headband.) The thought was that the boys would choose to be pirates and the girls would choose to be fairies. Of course, we knew it wouldn't be that cut and dried along gender lines. And, it wasn't. Several girls wanted to be fairies with eye patches. And one boy decided he'd rather have fairy wings than be a pirate. (By the end of the party he was a pirate with fairy wings, which, come to think of it, is probably the way to go.)

As the kids arrived and got settled, The Wife had it set up that some of them could play a ring toss game on an inflatable crocodile. 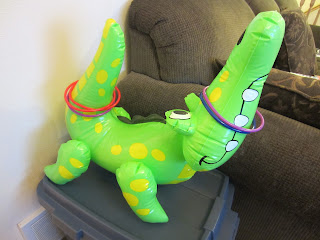 The kids were very entertained by this. They loved the crocodile.  (Little did the crocodile know that things would soon turn ugly.)

As the party started, The Wife had a lot of different activities to keep the kids busy. And happy. There was a scavenger hunt outside to find a hidden treasure. The kids loved it. The kids went outside and played on the swings. They came back inside and had ice cream and cake.

And then, the violence started. As part of the entertainment, The Wife had a large box full of balloons for the kids to play with. A couple of the kids picked up some balloons and started to lightly hit each other. In order to curtail it, The Wife suggested that instead of hitting each other, they instead hit the crocodile. The poor crocodile never knew what hit him. Suddenly, he was surrounded by seven kids pounding and pummeling him with balloons.

(It really was pretty funny. The kids were giggling and laughing and having a great time. And, when it was over, the crocodile was still wearing that same silly grin. He's okay.)

We then moved to a game of "pin the flag on the treasure map." (It's like a more politically correct version of "pin the tail on the donkey." Because we need to do whatever we can to curtail violence against donkeys.)

Then came the piñata. Of course, that's now politically correct, too. Instead of whacking the piñata to break it open for the prizes, the piñata now comes with several strings hanging from the bottom of it, one of which is the "special" string which release the prizes. The "prizes" included candy, spinning tops, and little finger-puppet unicorns.

Once the kids scooped up the prizes, it was time for Roni to open her gifts. This is the one regret we have from the party. When we invited Roni's friends to her party, it was not with the intent of scoring more toys for Roni. We weren't really expecting the guests to bring gifts. Especially not nice gifts. (I guess I'm just enough of a cheapskate to think that the kids would bring dollar store gifts, if anything at all.) But, the guests all did bring really nice gifts for Roni. And, Roni really enjoyed the gifts, and the other kids enjoyed giving them.

As the party wound down, we all went outside and played with sidewalk chalk, which was one of the gifts Roni received. The kids all wrote their names on our sidewalk. And then, the parents started arriving to pick up the kids. The party was over.

It really was an incredible party that The Wife put together for Roni. I'm amazed at how awesome she is. Sure, I helped. I changed a poopy diaper and mopped the floor. But, compared to everything The Wife did, it wasn't even a drop in the bucket. And yet here I am, exhausted and worn out. Suffering from "party hangover."

And yet The Wife got up and went to work again. (She even has parent/teacher conference tonight, making it an extra long day.)

My point? Even though I think I'm doing a lot for our kids, it's nothing compared to what their Mom does for them. She is amazing. And I am the luckiest.