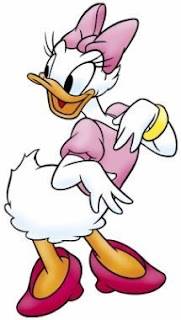 A few months ago, our kids were playing with a set of Disney character figurines. (Let it not be said that we are not cogs in the giant Disney Consumer Products Machine.) This set contained the six main characters from the cartoon Mickey Mouse Clubhouse, featuring Mickey Mouse, Minnie Mouse, Goofy, Pluto, Donald Duck, and Daisy Duck. For some reason, two-year-old Buzz kept gravitating toward the Daisy Duck figurine. (Figurine? Action figure? Doll?) He would play with Daisy above all the other characters, even going so far as to try to say her name. ("Duh-seeee.")

I found it odd that Buzz would pick Daisy. (When Roni was that age, Goofy was unquestionably her favorite. Now that she is older and more "sophisticated," she might choose Minnie over Goofy.)  It got me thinking about Daisy. Who are her fans? Why is she there? What does she contribute to the stories? Is she the favorite of anybody?

At Disneyland, all of the other main characters have their own house. Mickey has a house. Minnie has a house. Goofy has a house. Donald has a boat. Even Pluto has a restaurant called "Pluto's Dog House." But, nothing for Daisy.

It got me wondering why Daisy even exists. I can think of two main reasons: 1) So Donald has a girlfriend; and B) So Minnie has a girl friend.

I wanted to learn a little more about Daisy, so I started to google "Daisy Duck." (Yes, that is the state of my life now. I actually attempted to google Daisy Duck!) But, before I could get there, auto-correct took me instead to "Daisy Duke." Up to that point in my life, I had never associated Daisy Duck and Daisy Duke. I didn't realize how close their names are to each other. I mean, the first seven of the nine letters in their names are exactly the same! (Wait. Did I say "seven of nine?" Yes, you know I am a nerd guy when I can't type "seven of nine" without pausing to affectionately remember my favorite character from Star Trek: Voyager.)(......Okay, I'm back.)

So, I thought I'd do a little compare and contrast between Daisy Duck and Daisy Duke to see their similarities and their differences.

I wasn't sure, but apparently Donald and Daisy have never been married. They've just been dating for over 70 years. (Talk about fear of commitment! Hey Donald, put a ring on that thing!) (Or should it be: put a ring on that wing?)

Meanwhile, Daisy Duke has no siblings or parents, just cousins and an uncle. Daisy is cousins with Bo. Daisy is cousins with Luke. Bo and Luke are not brothers, they are cousins. Even the lame replacement refs cousins, Coy and Vance, aren't siblings with each other or anyone else. They are all cousins. And, Uncle Jesse is not the father of any of these people. I find this all rather odd. In my experience, hillbillies have a lot of kids. But here we seem to have five different one-child, parentless hillbilly families! It's all very confusing.

And, as far as romantic relationships go, Daisy Duke does not seem to be very lucky. On the rare occasions she actually is dating someone, that someone usually turns out to be a grifter in cahoots with Boss Hogg. (I'm not sure which is worse, 70 years of a non-committal duck with anger management issues, or a rotating band of ne'er do wells and hooligans?)

Fashion Sense: Yes, Daisy Duke has a kind of shorts named after her. That is very impressive. But, Daisy Duck doesn't even wear pants! (This one's too close to call.)

Appeal: As stated earlier, other than Buzz, I'm not sure who Daisy Duck's fans are. Most girls like Minnie better. Most fans of angry birds like Donald better. I'm sure there are some people who like Daisy best, but these people are definitely in the minority. (These are probably the same people for whom George Harrison is their favorite Beatle, Marlon is their favorite member of the Jackson 5, and someone not named "Kim" is their favorite Kardashian.)

On the other hand, almost every man is a fan of Daisy Duke. (At least all of the heterosexual ones.) I don't know what women think of her, but I don't get the sense of intense jealousy/hatred of Daisy Duke like I sense for others, such as Jessica Alba or Jennifer Love Hewitt.

Usefulness: From the episodes of Mickey Mouse Clubhouse that I've seen (which is more than you might think), Daisy Duck doesn't really do much. Mostly, she justs hangs out with Minnie.

In contrast, Daisy Duke often contributes to the Duke family shenanigans. She frequently rides around in her jeep distracting Roscoe, Enos, or Cletus. Or she has to rescue Bo and Luke. The point is, she does things that help.

Bottom line: Is there really any surprise how I think this is turning out? I am a heterosexual male. Of course I think Daisy Duke wins over Daisy Duck! I'm not sure why Buzz has latched on to Daisy Duck. Probably because he hasn't seen Daisy Duke yet.
Posted by Slow Joe 40 at 12:29 PM